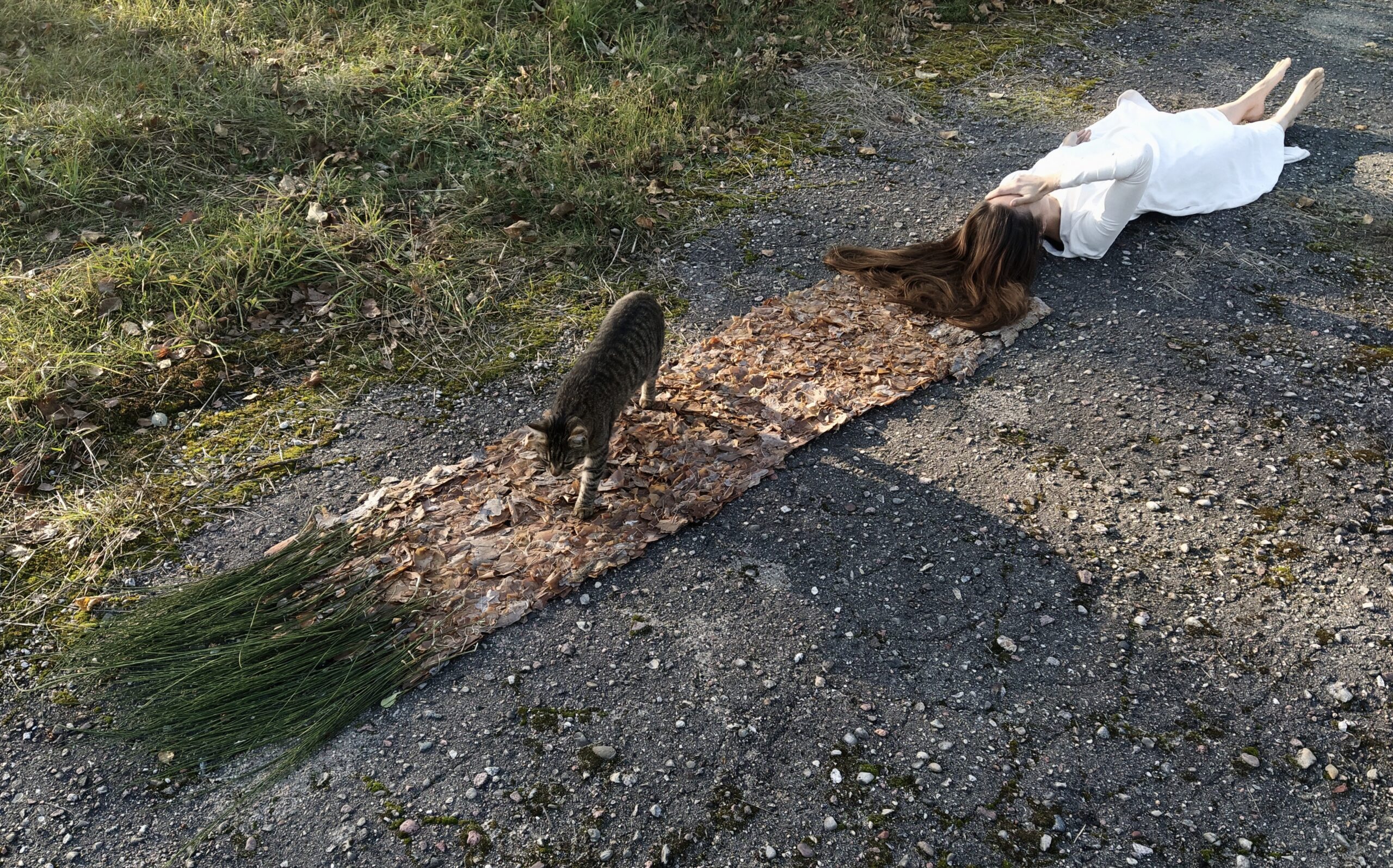 Tell us about yourself. What art do you do?

I mainly work with music. Now I am writing songs based on poems by Vladas Braziūnas and Stasė Lygutaitė Bucevičienė. This year I am releasing an album of songs based on the stories of the herbalist Eugenija Šimkūnaitė. But, I also have somewhat hidden passion for video arts. I used to create all sorts of short travel or experimental videos, but I stopped for a while. Now I’m slowly coming back to that and I’m creating video clips for my music from my archive of footage.

Did you have any goals when travelling to Kabeliai? Did you reach them?

Yes, I had an idea of what I was going to do, why I was going, but, over time, it took on other forms. As I went to the residency, I wanted to forget my broken marriage and that oppressive feeling of going through a divorce, so I called the whole creative process “Nuometas” [Wimple]. I deliberately planned to come in October, because this was the month of what would have been my wedding anniversary. So, I wanted to re-feel everything and then throw it away. I have linked the word “nuometas” to “nusimesti – throw away”. That throwing away took place throughout all of October. It was also a kind of personal therapy.

I collected the love stories of local grandmothers, recorded them, and compiled four short musical compositions from those recordings: “Ištekėjimas” [Marriage], “Išsiskyrimas” [Divorce], “Draugas, sugyventinis, o kas toliau” [Friend, partner, what’s next] and one instrumental composition. The original idea was to create music from these expedition recordings. I was wondering how young people used to meet, whether they loved each other, I even asked for advice on how to live with my husband.

And what did you hear?

Most of the stories aren’t really nice… A few of the grandmothers I talked to married someone they did not love and they still do not love their husband. Marriage was sometimes a way out because they lived very poorly and parents or a single mother couldn’t support a daughter, so they would give her away to a husband. A girl might have had a lover, but she would end up marrying someone else. At first, I was thinking of linking divorce to the death of the husband in old age. It’s also a sort of divorce, only you’ve lived your whole life together. But, the grandmothers didn’t talk much on such sad topics. They preferred fun stories. And one grandmother, when asked about her husband, became emotional and didn’t want to talk. I realised that she had loved him very much.

Where did the idea of “Nuometas” come from?

The idea of “Nuometas” itself, as an object, was born unexpectedly. While walking with my fellow residency participant, artist Živile Lukšytė, in the forest, I noted the pine bark that had fallen on the ground, that thin bark from the very tops of the trees, which looks like paper. I remember I had read in Peter Wohlleben’s book, The Hidden Life of Trees, that the bark is dropped by the pines like dandruff. So, they throw away that which they no longer need. And I had come here to get rid of what I no longer needed as well. So, I decided to collect pine bark instead of mushrooms that I hadn’t found much of anyway (maybe because I’d grown up in the city and I don’t have that intuition of where mushrooms grow). Out of those pieces I started to sew my wimple. I wasn’t very successful at first, because those pieces  were so thin and brittle, they would just tear when I pierced them with a needle. Later I wet the bark and layered the flaps to be thicker and firmer. I sewed everything with Laura Garbštienė’s hand-spun linen thread. While sewing, I had to pierce the needle through thick bark, I bloodied my fingers, and my back was sore from staying in a twisted position. But, it all went into the wimple like painful experiences, they left me and freed me.

Finally, when I joined that team working to clean up the old graveyard in Musteika, I learned about the invasive but very well-adapted plant in the sands of Dzūkija ‒ velniarūtė, the common broom shrub. We decorated the graves with those green wickers and viburnum, berries. I liked the plant and its name, which translates into Devil’s rue. And the rue is, after all, a plant symbolising girlhood, the rue wreath is discarded upon marriage. All this is symbolism of premarital life. So, the Devil’s rue, I thought, would be perfect for decorating this pine bark wimple, which symbolises to me not marriage, but rather divorce. The Devil’s rue became the trim for my wimple.

Did you feel that you got away from the city while living in Kabeliai, did you experience a change in rhythm?
Yes. Immediately I calmed down and felt grounded. I felt like I came back to myself again, as if I shrunk back into my body. But, during the residency, we had a short return to Vilnius. Then I actually felt frightened of how much chaos was in the city, and how immediately my inner peace was torn away and again I found myself in a stressful state. I wanted to get back to Kabeliai as soon as possible. Of course, when the residency ended, I still had to return to Vilnius, but the return was calmer and not as shocking. Perhaps the first time, when I left for a short while, I didn’t like to be abruptly distracted from my creative and internal release process.

Did you have a daily routine?

My daily morning routine was to go out for a walk with my cat Runcius, who lived with Živile and I. So, when I would wake up in the morning, I went to the school stadium with Runcius and would play with him, he demonstrated his agility and cleverness. It was a kind of morning exercise. I liked these morning walks, because I would say hello to the morning and the new day, the sun, I saw the season changing to fall, I experienced the morning frost or mist. Later, we used to have a long breakfast and often travelled with Živile to visit the grandmothers. And, when I started sewing the wimple, the work would start when I got back home, to the school building, and continued into the late hours of the night.

What stuck most with you from your time in the residency?

It was good to be alone with yourself. I liked to get on an old fixed-gear bike and pedal to the farthest store. I dreamed of riding that bike to Musteika, because I saw a road sign that it was only 6 km away. Eventually I did take that bike to Musteika to pick up my forgotten camera and to pick some of that Devil’s rue. The journey was long, slow and sandy. But I really liked it!

What inspires you to create?

I am inspired by inner experiences and, of course, nature. Nevertheless, my creative work helps me a lot in difficult moments. Thus, internal difficulties are often born into musical compositions or, in this case, the entire “Nuometas”.

What are your next plans?

I want to move to the village to spend the winter there. I want to try life in the village. So, really, I’m dreaming of a creative winter.