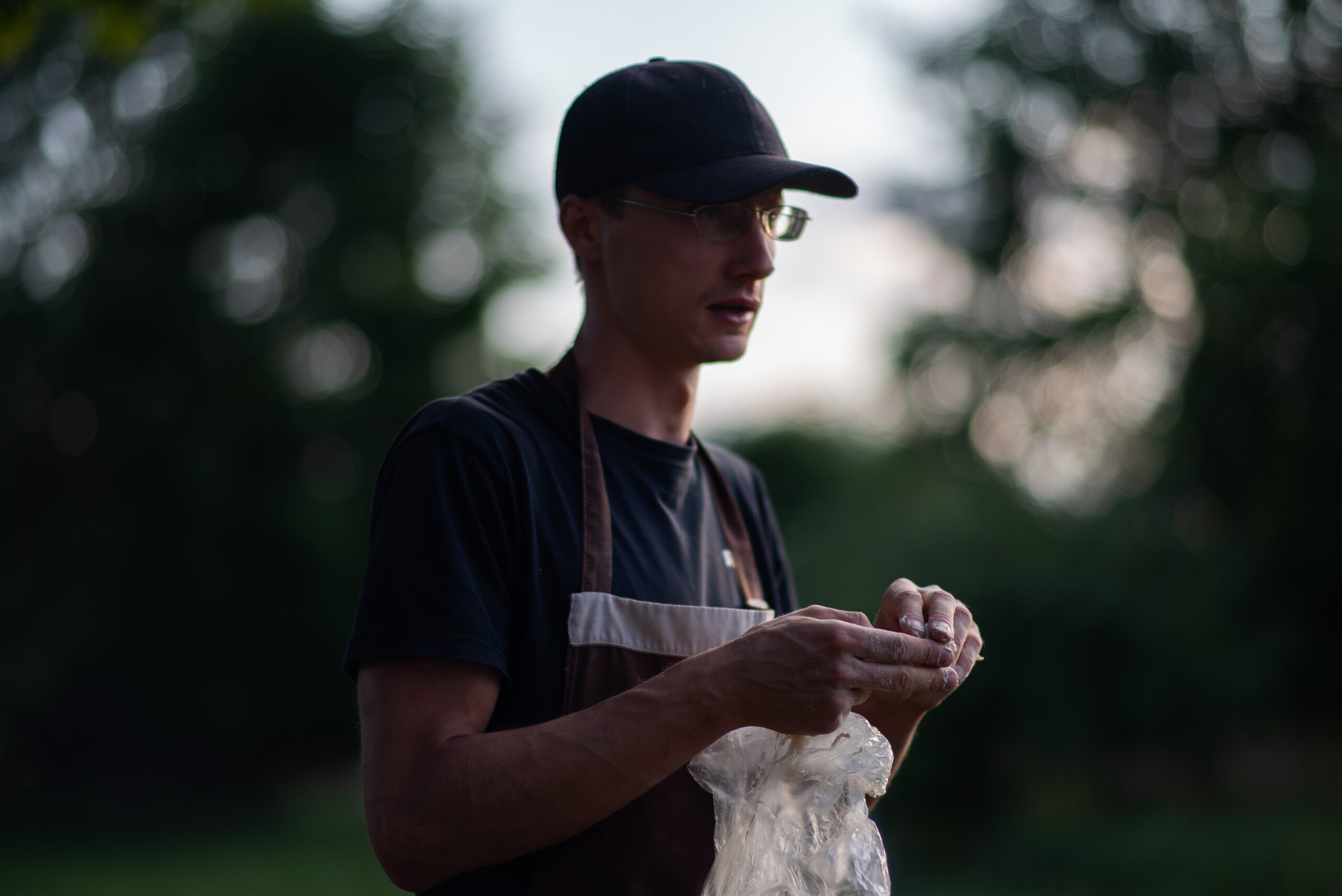 Arriving at the Verpėjos residence as a collector of mushrooms, Andrej Polukord hoped to
add more mushrooms to his current collection. Regrettably, misfortune seemed to follow this
collector: during the period when he was visiting, a desert-like drought prevailed, and if ever
rain did come, it always seemed to skip right over Kabeliai.

Almost as if he was cursed – the rain just never came and, trying to find out the reasons for
the drought staying in Kabeliai, the artist kept asking the local people if maybe they
understood why or knew something.

Rasa, who had a cow, told that the locals called Kabeliai the “Bermuda Triangle”. However,
this triangle was a sort of opposite version of the real Bermuda Triangle. The principle is as
follows: if it rains in the surrounding area, 99% of the time Kabeliai is in a drought. At the
same time, the beekeeper Valentukevičius shared that due to the dry air in Kabeliai, the local
bee honey becomes special, and people come to buy this honey come even from distant
Kėdainiai.

Having lost all hope to find mushrooms, the artist began to look for a home where he could
settle. Maybe he would be able to find something? Unfortunately, as a result of inflation,
housing prices increased so much that it was possible to buy only a rotting pile of wood at an
affordable price. While traveling and looking at properties that were no longer houses but
piles of kindling, the artist found a lopsided outdoor kitchen, which somehow reminded him
of something he had already seen before. Thinking long and hard, he finally realised where
he had seen a similar structure – in Pisa, Italy. The so-called “Leaning Tower of Pisa”. Both
the tower and the kitchen were tilted in the same way. Only here the structure was in the
design and style of the local rural residents.

When the walls of the outdoor kitchen are placed on top of each other, the imagery of the
Tower of Pisa becomes even clearer. By moving this tower to the entrance to the village of
Kabeliai, the artist wants to refute the stereotype that the homeland of masterpieces of
architectural culture is Italy. Maybe all masterpieces of architecture were born not where we
think, but in small cosy villages?

Just like over there, so too was the architectural idea here born unintentionally – from
situations formed from the environment.
The Bermuda Triangle-like shape of the roof and the top of the tower “Piza Kabeliai” is
meant to absorb lightning discharges, thus stopping in their tracks the rain clouds that keep on
passing the village and thus bringing rain to the surrounding area.

Andrej Polukord (b. 1990) is an artist splitting his time between Vilnius and Vienna. Andrej’s
work includes painting, installations, performances, photography, and video art. They feature
themes of everyday life, ecology, the ethical relationship of humans with nature, and in his
work these themes are often conveyed through humour, an adventure, storytelling. With his
work, Polukord creates unpredictable environments and absurd situations that create
ambiguity and a multifaceted feeling.